The shocking truth about the Talmud.

lorddreadnought в The shocking truth about the Talmud. 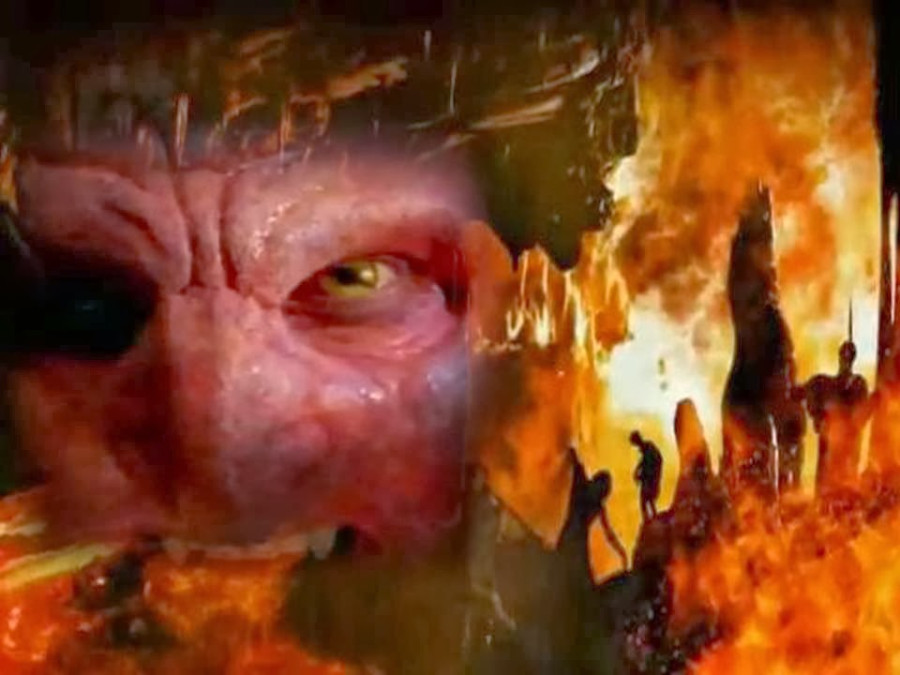 In Baba Mezia, 86a, for a start, we learn that: “God intervenes in a Rabbinic dispute and is logically defeated by a Rabbi.  God proclaims the Rabbi the victor in the debate.”
In Aboth 1.1 it is said that: “God gave the Oral [Rabbinic] Law to Moses at Mt. Sinai.”
In Gittin 60b we are told that: “God made the covenant with Israel only because of the Oral Law.”
In Baba Mezia 86a: “A dispute in heaven between God and a group of Rabbis is settled when a great Rabbi on earth votes for God.”
In Erubin 21b: “The commands of the Rabbis are more important than the commands of the Bible.  Whoever disobeys the Rabbi deserves death, and will be punished in hell with boiling excrement.”

A few examples of the “great wisdom” from the Talmud will be of interest to most anyone unfamiliar with its sage advice:

Gittin 69a & b tells of: “...the medicinal value of dirt found in the shadow of an outhouse; also of the excrement of a white dog.”
In Moed Katan 18a we learn that: “Not burying cut fingernails causes miscarriages.”
In Gittin 69b there is given: “Rabbinic cures for anal worms; also of bladder stones.  (For example, you hang a louse from the male membrum, then urinate on thorns.”)
In Moed Katan 17a  we read: “If one is being overcome by his evil impulse, he should go to a town where he is delivered from his temptations..."
Abadah Zarah 3b tells us that: “God’s activities during the day, include studying the Law and playing with Leviathan.”

Blasphemous and mindless Talmudic interpretations of Scriptures abound.  Here are a few examples:

Yebamoth 63a on Genesis 2:23: “Adam had sexual intercourse with all the animals in the Garden of Eden.”
Sanhedrin 76b on Exodus 21:12: “A man is not guilty of murder if he causes a poisonous snake to kill...a snake should be executed for murder, while the man goes free.”
Sanhedrin 59b on Genesis 1:28; “Fish used to be able to pull wagons.”
Erubin 18a on Psalm 139:5: “God made Adam with two faces.”
Berakuth 14a on Proverbs 19:23: “Going seven days without a dream proves that a person is evil.”

The greatness of Israel is a revealing and recurring theme in the Talmud.  Notice these expressions on that theme:

In Sanhedrin 11:1 we learn that: “All Israelites are righteous, and will inherit eternal life.”
Baba Bathra 10b tells Rabbis that: “The deeds of Israel are righteous, but the Gentiles are capable only of sin.”
Kiddushin 49b declares that: “Israelites possess 90% of all wisdom.  The other 10% is spread out among the Gentiles.”
Sanhedrin 58b: “A Gentile who strikes a Jew deserves death.  Striking a Jew is in God’s eyes and assault on the Divine Presence.”
Sanhedrin 37a: “Whoever destroys a single Israelite, it is as though he had destroyed the entire world.”

A few specific examples of the Talmud’s teachings about Gentiles (i.e., cattle, animals) should open some eyes:

Yebamoth 98a: “All Gentile children are legally bastards, since Gentiles are only animals.”
Baba Mezia 114b: “Gentile girls are in a state of uncleanness from birth, and marriage with them is prohibited.”
Baba Bathra 54b: “Property of Gentiles is like the desert; whoever gets there first gets it."
Sanhedrin 57a: “If a Gentile robs a Jew, he must pay him back.  But if a Jew robs a Gentile, the Jew may keep the loot.  Likewise, if a Gentile kills a Jew, the Gentile is to be killed.  But if a Jew kills a Gentile, the Jew is to go free.”
Baba Kamma 38a:  “Gentiles are outside the legal protection of the Law of Israel.
Sanhedrin 52b: “Adultery is not forbidden...with the wife of a Gentile, because Moses only forbids adultery with a ‘neighbor’s wife’, and Gentiles are not neighbors.”

Let modern women who are led to combat sex-based discrimination turn their ire upon the Talmud.  It is loaded!  Indeed, here is a major fountain of the bitter gall women have been forced to drink throughout most of history.  Jewish women especially should rise up against it in righteous fury:

Menahoth 43b: for example, teaches that: “A Jewish male should thank God for not making him a woman or a Gentile."
Baba Bathra 16b: “The birth of a girl is a sad occurrence.”
Aboth 1:5: “It is not good to talk to women, not even your own wife.”
Gittin 91a: “It is permissible to divorce your wife if she burns your dinner, or if you see a prettier girl.”

The Talmud’s teachings on sexual matters are especially revealing in light of the recent explosion of sexually explicit stuff on every hand which, as everyone knows, is growing kinkier by the day.  Coupled with the universal admission of control of the pornography industry and all the media and entertainment backup required to promote it thru “education”, TV, movies, etc., the root cause comes into focus.  Pedophilia and sodomy are Talmudic favorites:

Though other religions have many good things to say about Jesus, Talmudic Judaism radiates only the most intense hatred for Him.  See if some of the following helps in understanding the Christian-bashing that is becoming a national and even universal sport (unless, of course, the Christians are major promoters of Israel, helping big bucks to flow there from government, military, and tourists !):

Israel-supporting Christians must snap out of their spiritual blindness toward everything “Jewish” and begin to absorb what Talmudic Judaism really thinks of them....:

Abodah Zarah 16b, 17a: “Jews should stay away from Christians.  Christians are allied with Hell, and Christianity is worse than incest.”
Abodah Zarah 17a: “Going to prostitutes is the same as becoming a Christian.”
Abodah Zarah 27b: “It is forbidden to be healed by a Christian.”
Sanhedrin 90a, 100b: “Those who read the gospels are doomed to Hell.”
Sanhedrin 99a: “When Messiah comes, he will destroy the Christians.”
Shabbath 116a: “The Gospels are the falsehood of blank paper and the sin of blank paper.  The Gospels are to be burned; the New Testament is like blank paper.”
-------
(All quotes taken from the Lutheran Church compilation in the Concordia Library. Missouri Synod.) 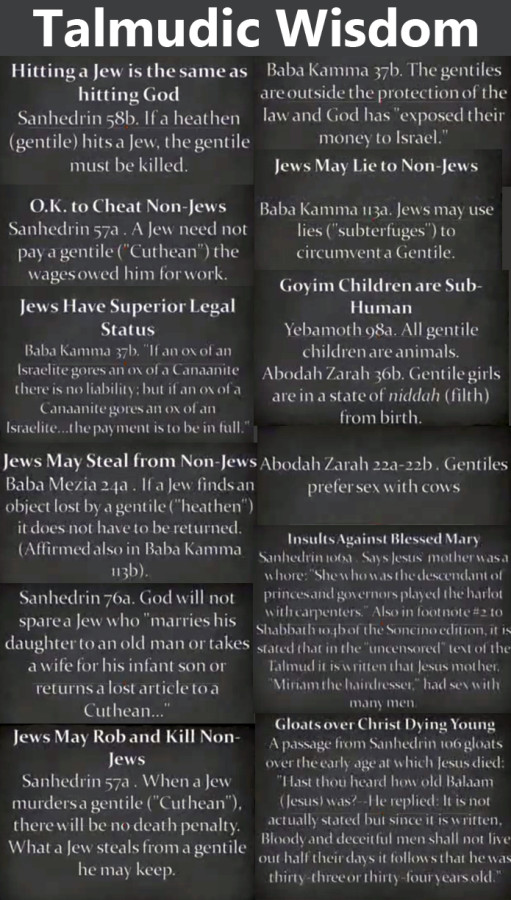