Christmas is under brutal Jewish attack.

lorddreadnought at Christmas is under brutal Jewish attack.

Every year, the world’s biggest Menorah stands right across from the White House on government property.
During the Christmas season Menorahs are displayed on prime public property across the United States. Thousands of Menorahs are placed in front of town halls, federal buildings and schools.

The Supreme Court of the United States has ruled that Jewish Menorahs are allowed, but Christian-themed scenes and deco-rated crosses must be banned.

Even beautiful Christmas carols that have been sung since the earliest days of America are now banned in most schools.

Although it may come as a surprise to some Americans, the effort to destroy Christmas traditions has been led by the organized Jewish community. The American Jewish Committee, the American Jewish Congress, the ADL and a host of powerful Jewish groups have led the attack against Christmas.

The ACLU is also active. Since its inception the ACLU has been dominated by Jewish lawyers and Jewish funding.

To put it bluntly, the war on Christmas has been led by Jewish organizations, financed by Jewish financiers, fought in the courts by Jewish lawyers, and lobbied in government, by Jewish influence. Underlying the whole campaign is the Jewish dominated media. Extremist Jews who make up less than three percent of the population have prevailed over the wishes of 90 percent of the American people.

The war against Christmas has been fought for decades. Jewish groups first forced a ban on any prayer in school. Then they forbade moments of silence for fear that kids might pray. Then they stopped any crèche or cross in public areas at Christmas time.

Their next step was to re-strict the mention of Christ-mas itself in institutions, transforming “Christmas” to “Winter Holidays” and” and “Winter Break.” Then the singing of Christmas carols in schools. Now, they replace Christian Christmas symbols with open Jewish symbols!

This cultural war extends to all of our ancient European traditions. They are banned or slandered in deference to “Jewish sensibilities. “

Jewish-led media has had a crucial role in supporting this attack on our traditions and in blunting our resistance. Doubters of Jewish media control, should read The Los Angeles Jewish Times (Oct. 29, 1999) where it boasted that four out of five of the largest media conglomerates are directly owned by Jews and the fifth is as pro-Zionist-controlled as the other four.

Perhaps nothing exposes the Jewish extremist power over us more than the fact that at the same time they have supported banning Christmas Christian displays and Christ-mas carols, they have quietly replaced them with Jewish Menorahs and the celebration of obviously Judaic Hanukkah racism on public property.

Here is a quote from “Nativity Scenes” in Wikipedia:
Nativity scenes have provoked controversies and lawsuits. In federal court pleadings in the United States, for example, the New York City, New York, school system defended its ban on nativity scenes…the judge in the case upheld the ban, noting that the ban on nativity scenes is not discriminatory while permitting Jewish Menorahs and the Islamic star and crescent…In another instance, a suburban Philadelphia, Pennsylvania, United States school banned a nativity scene while permitting a Menorah display. The school’s principal stated, “Judaism is not just a religion, it’s a culture.”

To say that a Menorah is not a religious symbol is, of course, absurd. Here is a quote from the prominent Jewish website, Judaism 101:
One of the oldest symbols of the Jewish faith is the Menorah . . . It has been the most recognizable symbol of Judaism from ancient times.

Interestingly enough, at the same time symbols of the birth of Jesus are torn down, symbols of anti-Christian Judaism are erected.

Judaism teaches that Christ was an idolater and that idolaters should be murdered. Most Christians don’t know the fact that the chief Jewish religious book is the Talmud. It sets the entire course of law by which Jews must live, boasting that Jews themselves were the ones who executed Jesus, not the Romans. It also claims that Jewish priests in the afterworld have conjured up Jesus where they are boiling him in excrement for eternity.

I know this sounds ludicrous and impossible to the average Christian today, but this Judaic hatred of Jesus is easily proven. Recently a book was published on that very subject by the head of Princeton University’s Jewish Studies Department, Peter Schafer, called Jesus in the Talmud. The book is endorsed by prominent Jewish rabbis. Here’s a quote from a review of the book in Publishers Weekly:

What exactly is so scandalous? How about Jesus punished in Hell for eternity by being made to sit in a cauldron of boiling excrement? That image appears in early manuscripts of the Babylonian Talmud, as does a brief account of Jesus’ trial and execution—not by the Romans but by the Jewish high court, the Sanhedrin. …

Jewish hatred of Christ and Christianity can be seen in a never-ending parade of vicious Jewish attacks on Jesus and Christianity in the media. It is illustrated by Larry David’s HBO television program “Curb Your Enthusiasm” where this Jew urinates on a picture of Jesus. Two pious Christian women are then mocked and ridiculed for thinking that the liquid on the face of Jesus is a tear.

As the Jewish Talmud commands, Chabad hates and condemns Jesus Christ and Christians as “idolaters,” and it proclaims that Jews have a divine right to rule over Gentiles. The purpose of all Gentiles on earth, they say, is to “serve Jews.”

A leading Chabad rabbi, Yitzhak Ginsburg wrote in America’s largest Jewish newspaper, Jewish Week, April 26, 1996, that Jews even had the moral right to seize a gentile on the street and “take the liver of an innocent non-Jew,” if a Jew needed it.

Hanukkah celebrates the mass murder against both the Greeks and all Jews who married Greeks or accepted Greek culture.

Ironically, any group that opposed “assimilation” would be viciously condemned by the same pro-Hanukkah Jewish media!

Don’t think it is only Jewish groups like Chabad who have these beliefs. Every major Jewish organization campaigns against inter-marriage and assimilation.

If Jews say those same things, they get to erect racist, genocidal symbols that oppose assimilation — right next to the White House!

But, if you are a European American and you say you want to preserve your people, you are condemned as a “racist” and “hater.”

Ironic isn’t it? A manger scene of a child being born in the name of love and joy; for peace on earth and goodwill toward men — is banned. And what is it replaced by?
A symbol of Hanukkah celebrating the annihilation of innocent people by Jews.

Barack Obama will solemnize a Hanukkah celebration at the White House this year.

Imagine for a moment if there were a White House ceremony commemorating White opposition to assimilation and intermarriage with Jews? Would the media be silent?

The blatant double standards reveal clearly the increasing Jewish power and influence over our media, government and culture.

Jewsih Anti Defamation League (ADL) shows that it seeks to limit, not just Christian symbols, but the wider symbols of European heritage:

First, it is important to note that while Christmas trees, Santas, wreaths, wrapped gifts, and reindeer are commonly used… Nevertheless, their inordinate usage is inappropriate… Suggest alternative winter decorations…that may be more inclusive.

A number of Jewish organizations have be-gun to go after that distinctly European Christmas tradition: the Christmas tree.

At Missouri State University, a 20-foot Christmas tree was taken down after Lorene Stone, dean of the College of Humanities, was told by the school “Diversity Commission” that a Jewish faculty member said the tree showed “a lack of sensitivity” to those of other religions.

Stone, who put the tree up the day before Thanksgiving, said she didn’t use any religious symbols on it. And then she invited Jews to erect a Menorah (even though a Menorah is obviously religious).

In Seattle, using the threat of a costly law-suit, a Jewish rabbi, Elazar Bogomilsky, forced the Seattle Airport to take down a number of large and beautiful Christmas trees it had erected for the holiday. Jewish intimidation such as at Missouri State and in Seattle signals the increasing removal of Christmas trees from public property across the United States.

Jewish Hollywood continues to produce films and TV programs that defile our European Christmas traditions. Even the venerable figure of Santa Claus or St. Nicklaus has not escaped Jewish hate.

In Seattle, Rabbi Bogomilsky’s attack on Christmas caused a tremendous backlash. A vast majority of Americans are sick and tired of these Jewish extremists trying to destroy our heritage.

There is a Jewish war raging against Christmas and against every true interest of our people. But, finally, our people are awakening!

The Jewish War on Christmas should awaken us that Christmas and everything else we hold dear is under brutal attack. 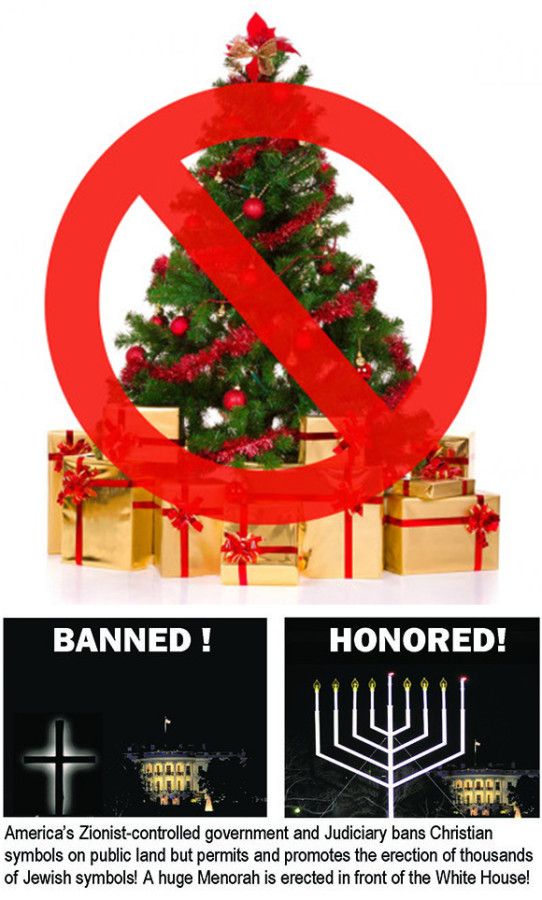 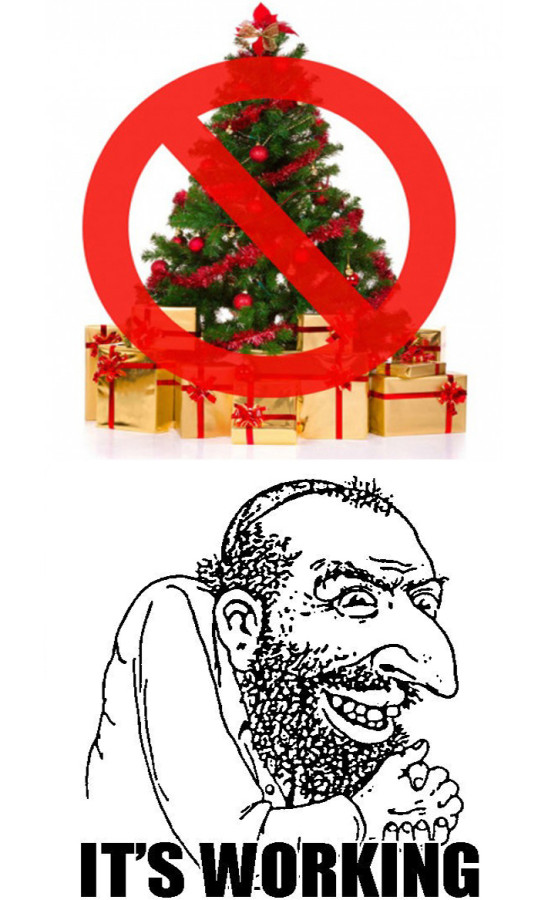